Aspects of Humour Translation. Case Study: Jerome K. Jerome's Three Men in a Boat (to Say Nothing of the Dog) and Three Men on the Bummel: teză de doctorat

Humour has often been subject to investigation, since its versatile, obscure and complex nature has offered sufficient ground for deciphering, analysis, and debate. In spite of its being many scholars’ favoured research subject, there are still issues to be clarified, revisited and improved. Combining all the features and aspects of humour into a consistent definition through the centuries has turned out to be too difficult a task to accomplish, although many attempts have been made across time. Many classifications of humour have been advanced, but scholars have not successfully circumscribed it into one theory, being convinced that this is impossible because of its controversial and relative character. Yet, the gradual development of the humorous approaches has broadened the concept of humour to the status of “umbrella term” (Dynel, 2009: 1284) encompassing diverse forms, mechanisms, and perspectives. 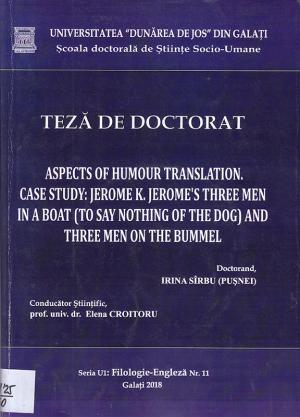